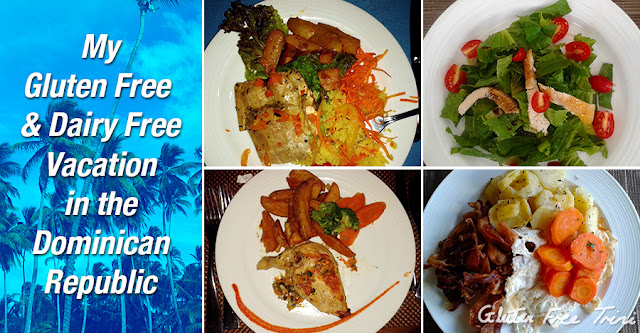 Recently, I visited the Dominican Republic for a week vacation and to attend my cousin’s wedding. This was my first time travelling to a different country since being on a gluten free and dairy free diet I was mostly worried about the food, of course. I was also travelling to a country where Spanish is the primary language and I wasn’t fluent.

In the Dominican Republic, I stayed at the All-inclusive” Now Larimar Resort in Punta Cana”. On their website, they mentioned that all their restaurants had gluten-free options but I still felt I should be prepared. So the first thing that I did was order a lot of gluten free snacks and protein bars from Amazon for those moments where I might not get anything to eat. I  ordered a box of NuGo FREE Bar, Dark Chocolate Crunch, 1.59-Ounce Bars (Pack of 12) and a box of Larabar Gluten Free Fruit & Nut Food Bar, Blueberry Muffin, 16 - 1.6 Ounce Bars from Amazon. I also bought two boxes of Blue Diamond Almonds Honey Nut-Thins Honey Cinnamon in Trinidad. 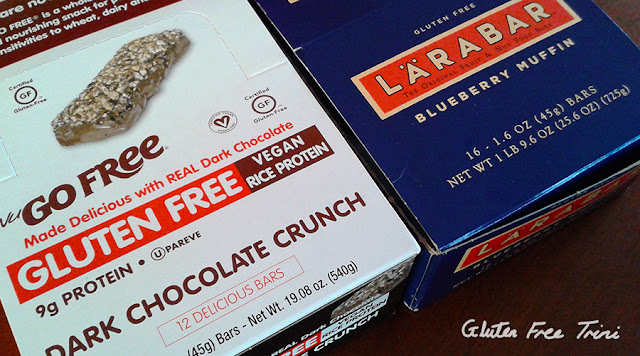 I made some allergy cards in Spanish and in English to help explain my diet. Using the word “allergy” is a bit of an exaggeration since I do not have a gluten allergy but I felt people would be more cautious if they saw that word. You could call it lying but I wanted a pain-free vacation so I was willing to commit the sin. Allergy is more universally understood than Celiac Disease or autoimmune disorder. Plus, I felt talking about Celiac Disease all the time can be boring. Sometimes I like having days without talking about my condition in great detail.

I never left my room without my allergy cards making sure to showthe staff the Spanish card to ask if a particular dish was safe to eat. The customer service was really good and they always helped me when I asked. I usually looked for the manager since their English is usually better and they were able to explain to the other staff what needed to be done. 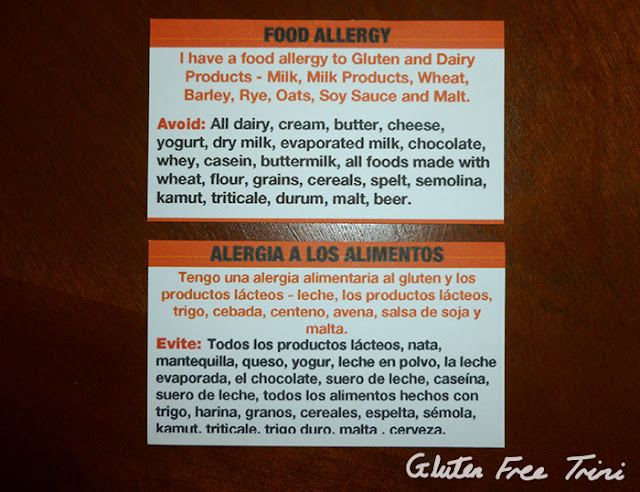 On the day of our departure from Trinidad, I ate waffles with almond butter and strawberry jam before we left the house around 3:00am. While we were on the plane heading to Panama, they served a  breakfast  of scrambled eggs or pancakes and each tray had bread on it. I had second breakfast which was Udi’s Plain White Bagel with almond butter and strawberry jam. On the 2nd flight from Panama to the Dominican Republic, they served pies for lunch. I ate one of my Nugo Chocolate Crunch bars instead.

Reviews on some of the restaurants: 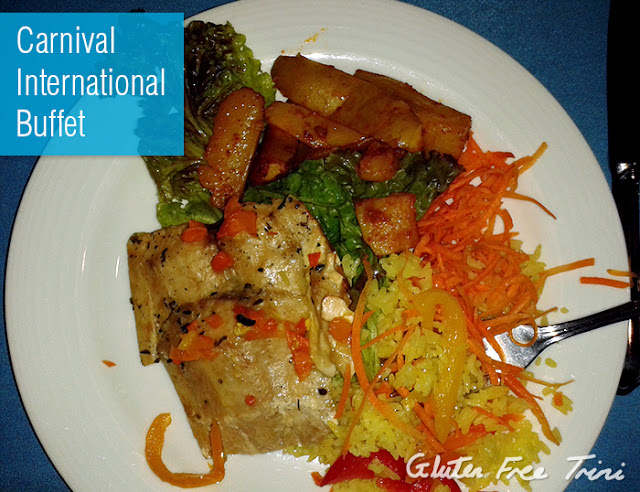 For my first meal at the resort, I went to the Carnival Buffet for dinner. I had lettuce, shredded carrots, rice with vegetables, roasted potatoes and Mahi Mahi filet. I wasn’t so sure if the fish was safe so I showed one of the chefs my Spanish allergy card and he told me that it was. 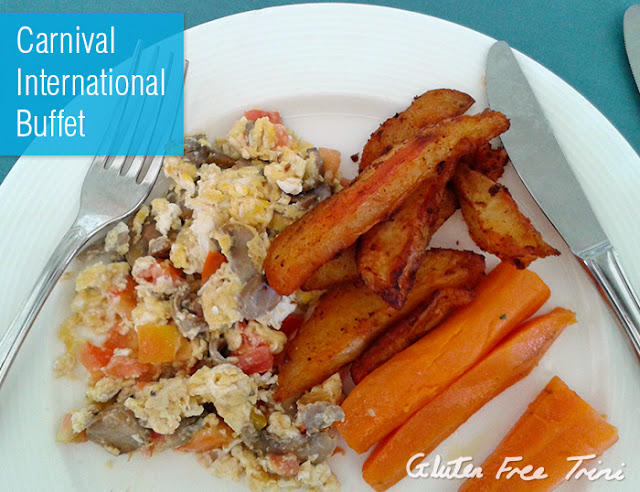 On the 2nd day, for breakfast, I went up to a man who looked like a manager and showed him my Spanish allergy card to ask if I could have the scrambled eggs in the buffet. After he read it and we walked around the buffet, he told me that the scrambled eggs weren't safe since they had milk. He took me to a chef who was making omelets and told him about my allergies. I asked for tomatoes and mushrooms in the omelet. I noticed that the chef was mixing everyone's omelets in one bowl and some people before me in the line hadr cheese. So I was a bit worried about the milk contamination. When it was my turn, he wiped the spatula and grill-top, placed the tomatoes, mushrooms and eggs directly on the grill and didn't mix them in a bowl. After that, I added steamed carrots and roasted potatoes to the plate. When I was going to my seat, the manager, José, stopped me to check my plate to see if everything was safe. That was a really nice thing to do and I had no digestive issues with the food afterwards. 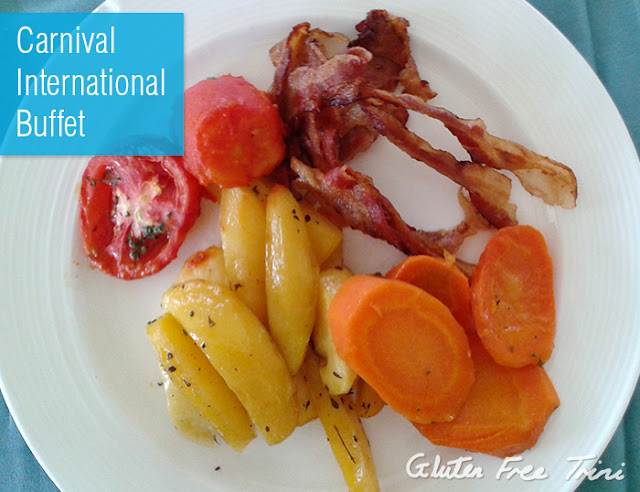 On another day, for breakfast, I ate bacon, seasoned potatoes, tomatoes and carrots. I didn't feel too adventurous to try the eggs since I was goingon a Catamaram boat ride a few hours after the meal. For dinner on the same day, we went to Carnival again. It was Mexican Tacos Night. I had white rice, roasted potatoes, grouper filet, chicken ceviche, mixed vegetables, roasted tomatoes and roasted melongene/eggplant. I didn’t get a chance to take a picture and when I remembered, I had already eaten  most of the food. 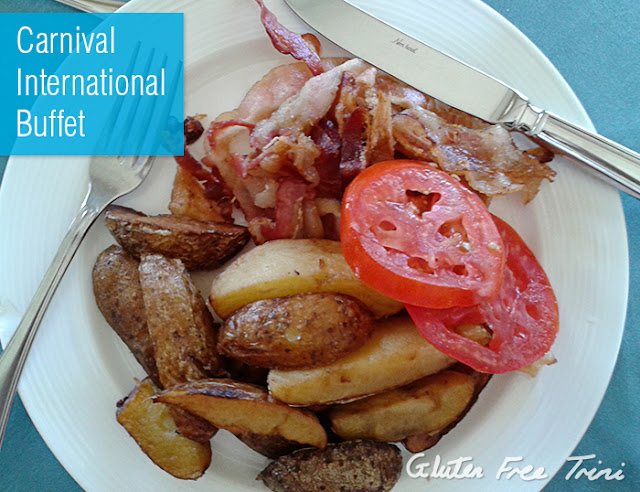 On the next day, for breakfast, I had bacon, roasted potatoes and fresh tomatoes with green tea. For lunch, I had white rice, roasted potatoes, eggplants with tomatoes and plantain. A lot of the meat in the buffet this time had ingredients that I couldn't eat. I really wanted to eat the chicken, it looked so good. 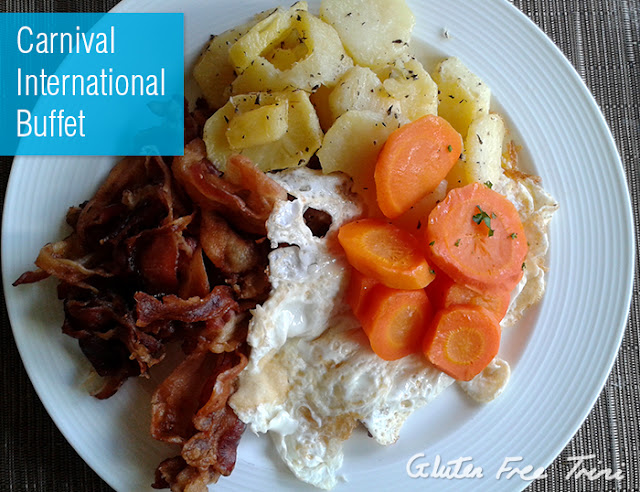 For breakfast on another day, I had bacon, potatoes, eggs and carrots. We were going on an all-day tour to the capital of the Dominican Republic, Santo Domingo. So I ate a lot heavier this time. 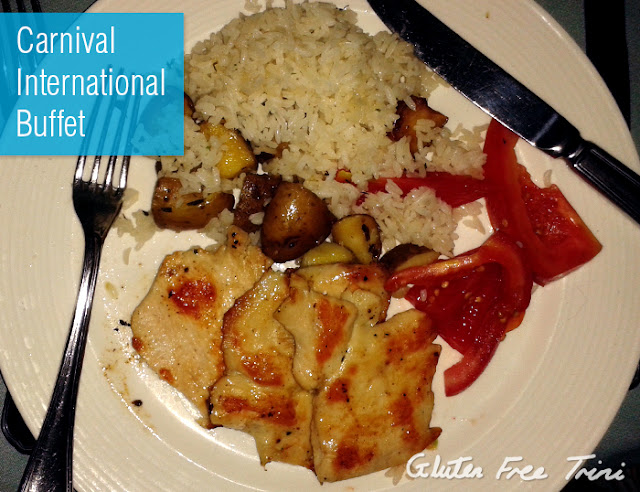 After the tour, for dinner, we went to the Carnival Buffet. I had potatoes, white rice and tomatoes. I wanted some chicken so I showed one of the managing staff, George A., my card and he found out that all the meat in the buffet had soy sauce or another sauce with gluten. He got a chef to cook chicken that would be safe for me and he brought it to my table while I waited. The chicken tasted great and I was super happy with the service. 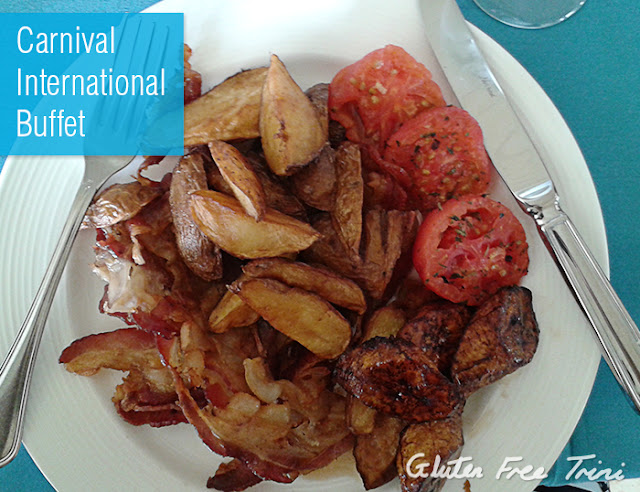 For my final day in the Dominican Republic, I went to Carnival for breakfast, I got help from George A., again. I had bacon, potatoes, roasted tomatoes and caramalized plantain. 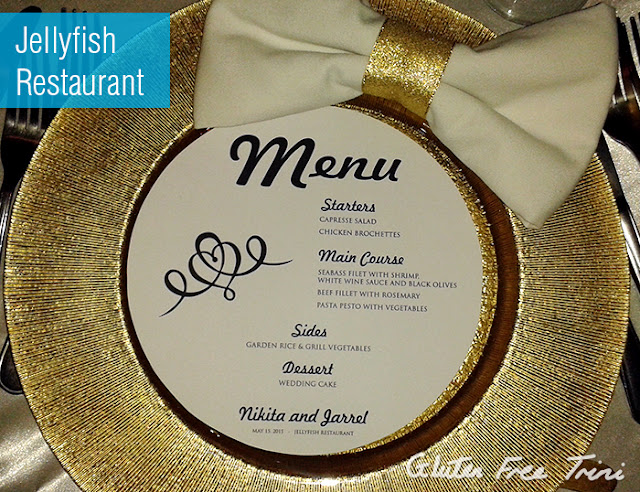 The wedding was at the Jellyfish restaurant. For the wedding menu, they had a set menu, no buffet. I had a discussion with the manager of the restaurant about the menu a few hours before dinner serving time. He even made suggestions for the substitutions which was really nice. He told me not to get sauce on the seabass because there is wheat in it. Since I could not eat the wedding cake, he suggested a fruit dessert so I wouldn't feel totally left out. 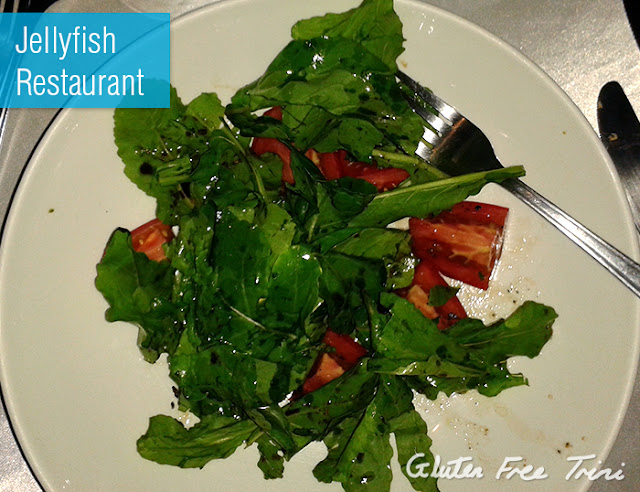 For the Starters, I got the Capresse salad drizzled with balsamic vinegar and olive oil. It tasted great. The manager was standing close by my table to direct the waiter to give me the right meal. 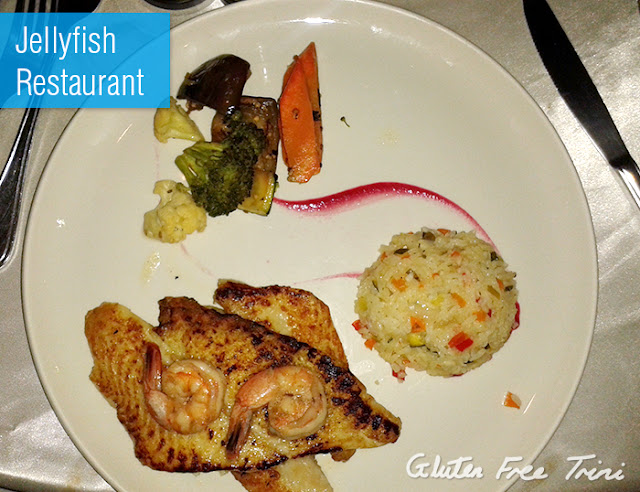 For the main course, I had Seabass Filet with shrimp, garden rice and grill vegetables. They left out the sauce. 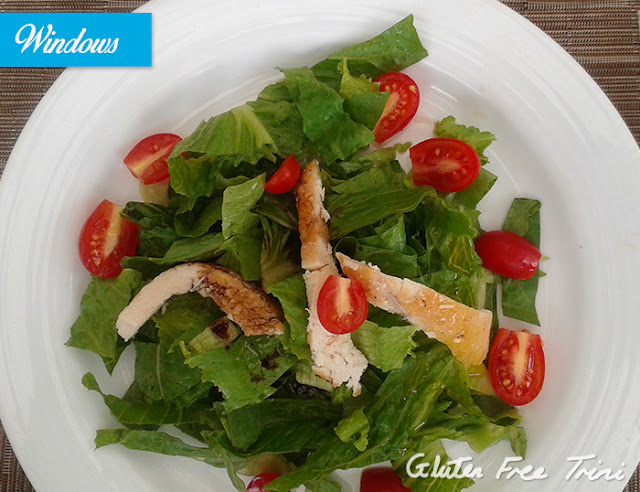 For lunch, we went to a different restaurant, Windows. There were 7 options on the menu. I  picked the Caesar salad with chicken and tomatoes. I showed the waiter my Spanish allergy card ,  with a sad look on his face  he said that he felt so sorry for me since I cannot eat gluten and milk and I even got a hug, lol. 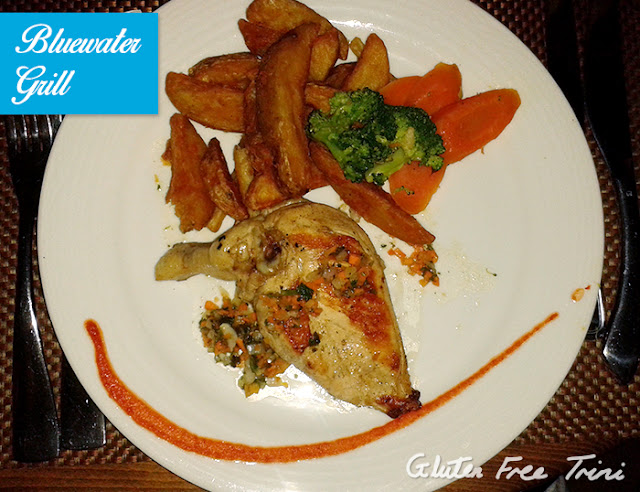 We wanted to try a different restaurant so we went to Bluewater Grill. They actually had gluten free labels next to some dishes in the menu which made me really happy. When I made my order, I still mentioned that the meal has to be gluten free and showed the waiter the card. It became a habit. I ordered grilled chicken breast, sautéed vegetables and seasoned potatoes. 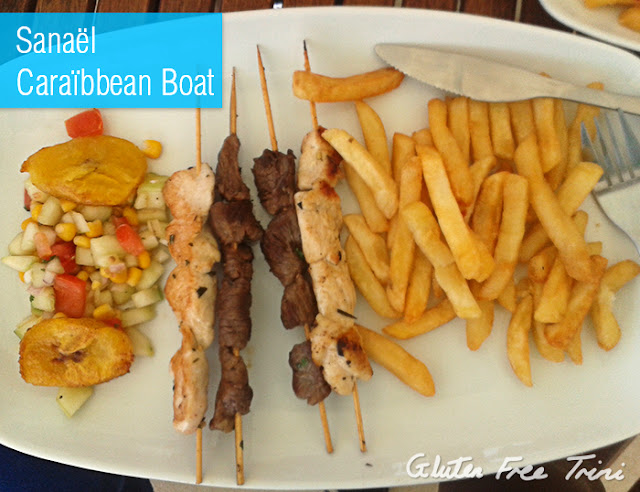 During the boat ride, we were served lunch. Everyone got the same dish and there were no other options. I showed the staff the allergy card and they told me that it was safe. The meal   consisted ofChicken and Beef Kebabs, French fries and a side with plantain, cucumbers, tomatoes & corn. 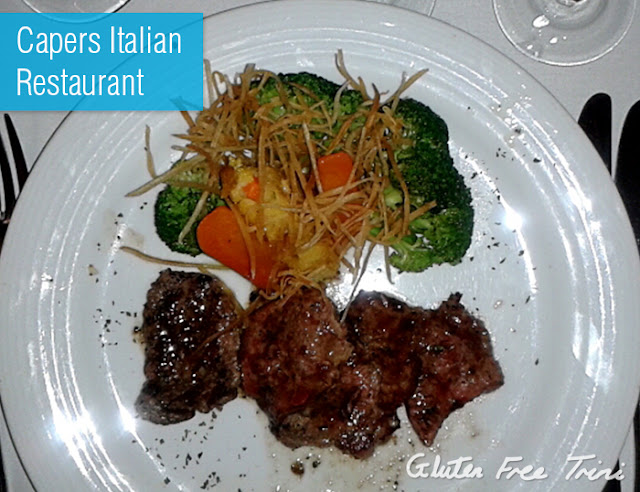 To try something new, we went to an Italian restaurant. Ther were only two gluten free menu items. One option was Scaloppine al Vino Marsala (Beef scallop filet flamed with Marsala wine, served with fried polenta and seasonal vegetables). The next option was Filetto di Pesce alla Siciliana (Fresh fish fillet cooked with white wine, fine herbs, chopped fresh tomato and garlic served with vegetables stew Caponada style). I  picked the beef option and I wished there was more beef.
Tuesday - Our tour guide  was  Leo. The other guides were Estaban Hernandez / Rudolpho. We went over Travon river, the canal de la Mona.  We crossed Higuamo river where there was  a cement factory. Then we toured  Christopher Columbus' home. 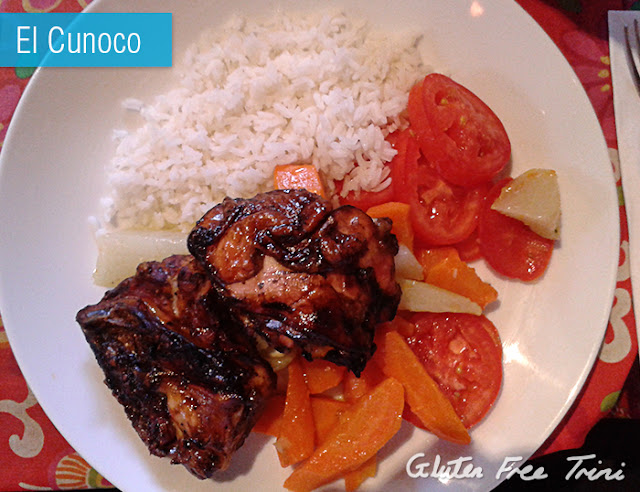 During the tour of Santo Domingo, we went to El Cunoco for lunch. It was a buffet style restaurant. I showed one of the staff my spanish allergy card and she asked the chef to help and they showed me what I could eat. I had white rice, tomatoes, carrots, cristophene and chicken. I loved the chicken, it tasted great

I realized that buffet-style restaurants were the better option for me. There were so many food choices that there would be at least 3 things I could eat. I just had to be careful with the spoons/thongs and observe how the people were serving the food. For the whole vacation, I managed not to get sick and it made the experience even better. The allergy cards were a lifesaver. 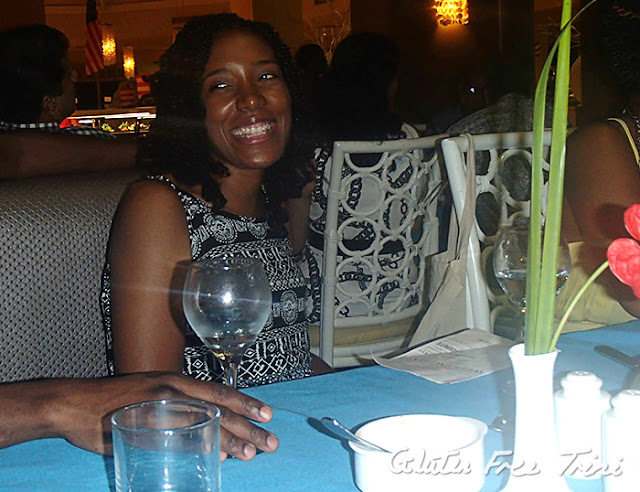 Popular posts from this blog

I've been checking out some Gourmet Shops for Gluten Free, Dairy Free Foods. Each shop/store has different type of food items.

Be Free Foods Organic Grocery
Location: #35 O'Connor Street, Woodbrook, Port of Spain, Trinidad
Tel: (868) 622-5925
Email:befreefoods@gmail.com
Description: They have the largest collection of Gluten Free Foods in Trinidad so far. They have a lot of gluten free, wheat free, dairy free, nut free, soy free and preservative free products. They have Snacks, Cereals, Baking Supplies, Beverages, Breads, Frozen Food, Ice Cream, Pasta and Noodles, Candy, Seasonings and many more. They have a wide range of certified gluten free products and they also help you with selecting items suitable for your diet.
Facebook Page 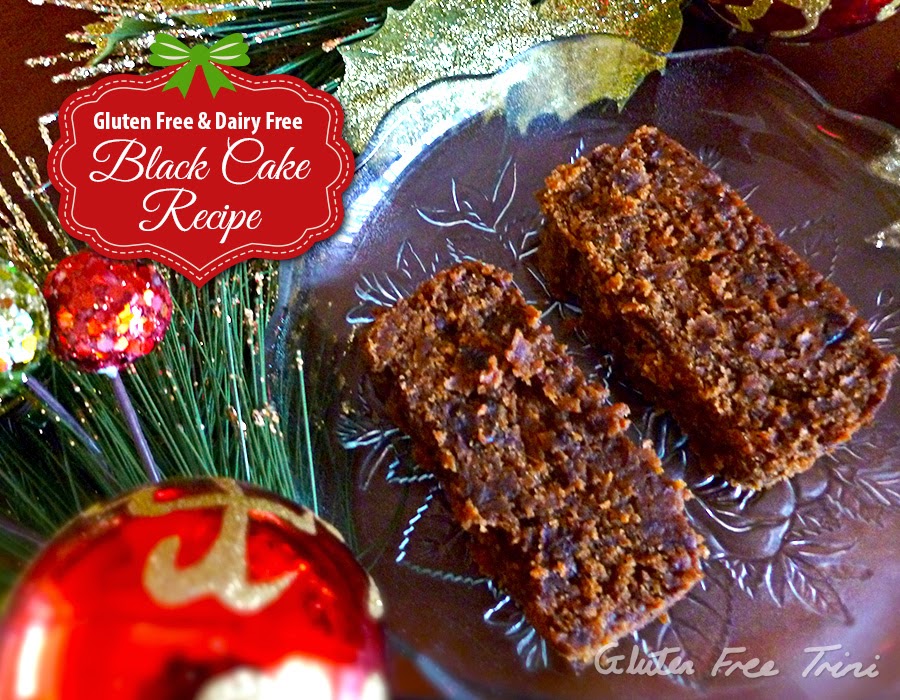